I can post now I've got me camera sorted. Here's the bookmark I started for my friends 65th birthday present. The original design is from Basket Edge by Claudine Jacobs 1916. My first attempt: 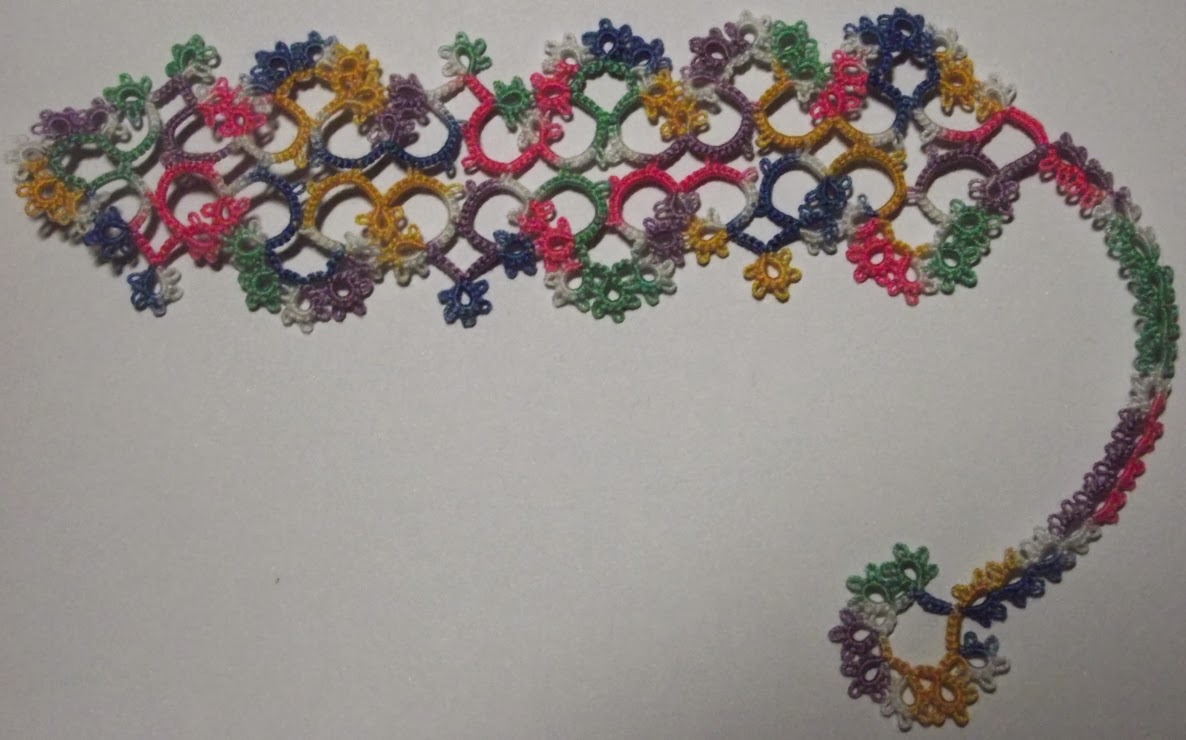 Can you see where I went wrong??? Has three of the large fans (top right) instead of two with a single between <DUH!> Yep messed up - could hardly gift that one!!! Silly mistake and I'd finished it before hubbie pointed it out! <chunter> SO here is version two - simplified soo I didn't make the same mistake again.... 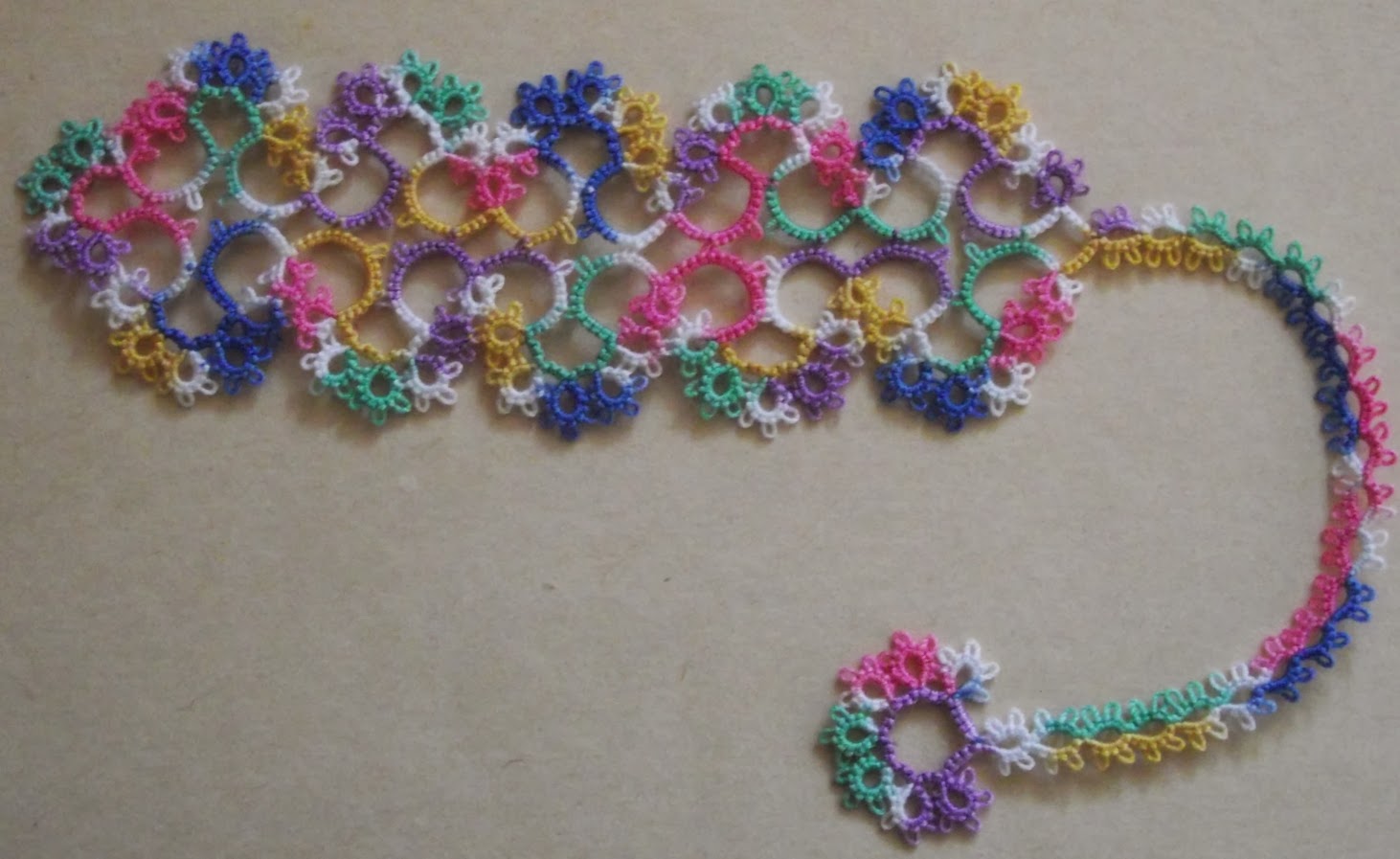 The thread is Olympus #40 Colour M7 and just perfect for all them picots. Holds it shape and retro-tats well - and don't I "know" how to tat backwards!!!! :-) 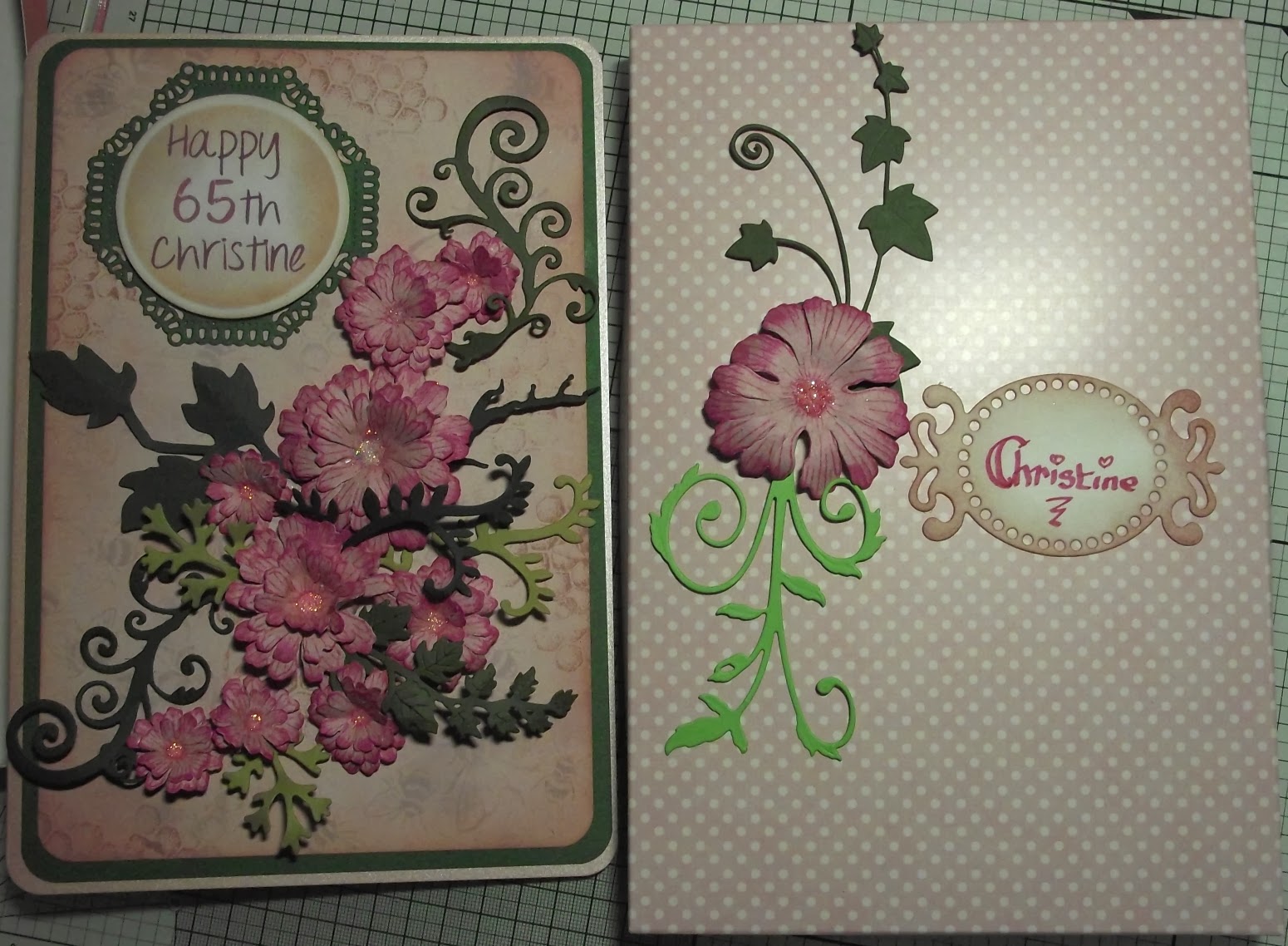 Left is the front of the card I stamped the background using Chocolate Baroque's Honeybee and the three dimensional flowers made from one of my Spellbinders die cuts. Right is the box lid (mmm made that too!) 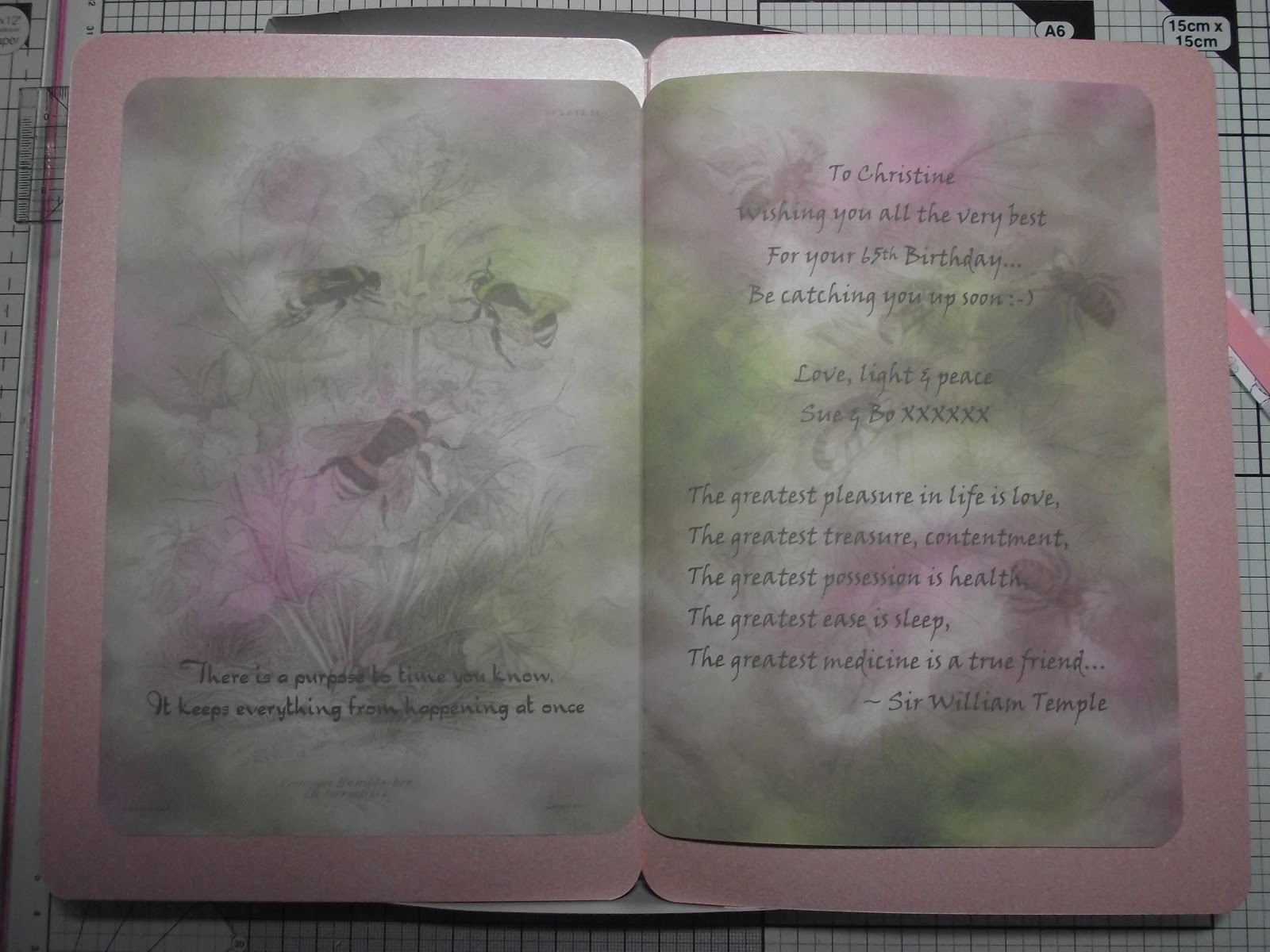 The insert was produced with Serif Craft Artist using a their transparency system on a background from Daisytrail and vintage beehive images shared by Graphics Fairy. Christine has her own beehive these days - soo seemed appropriate. The sentiments are from a gathering of such from the last 40 years or more... 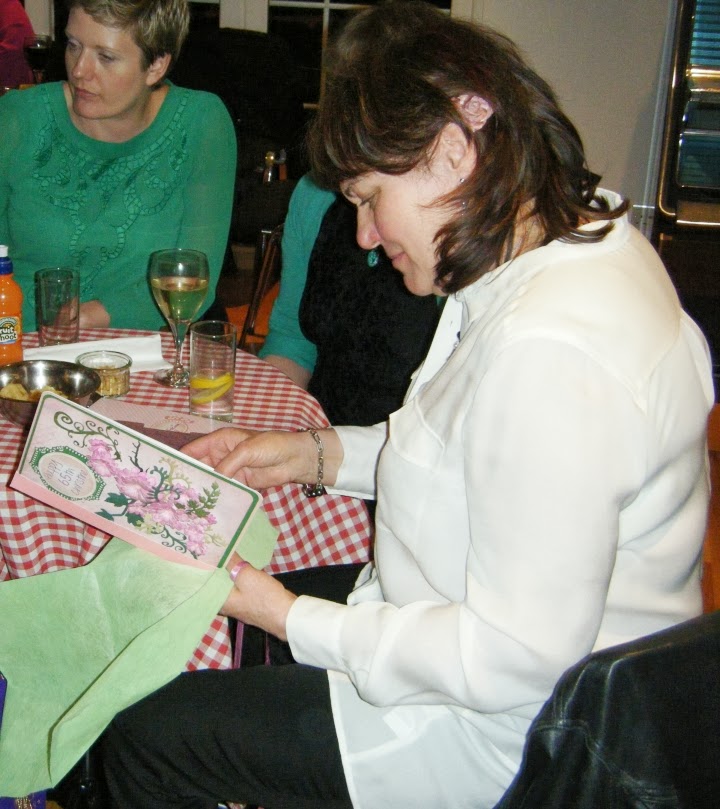 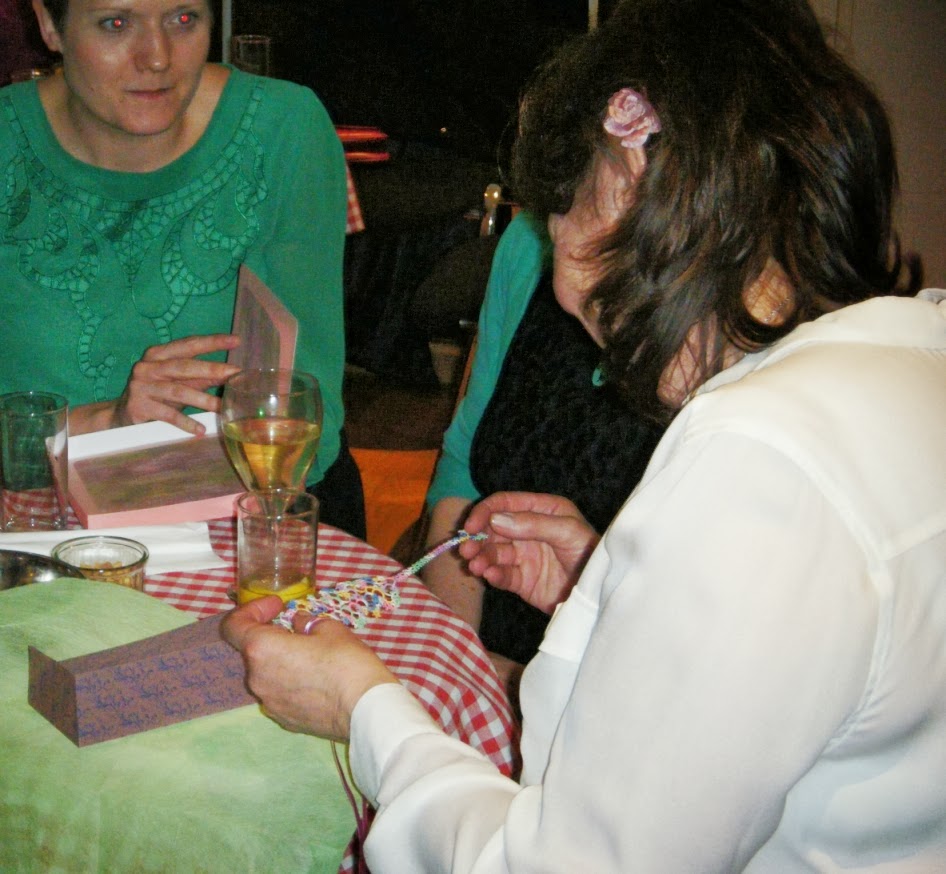 Here's Christine opening her present. Well happy as the last bookmark I made her was when I first started tatting in 1998!  Happy Birthday and enjoy for a looong time to come :-)

I know I've quiet but busy with exchanges and to make for a friends 65th (both card & pressy).


While I was hunting for an original pattern I'd started on me laptop (don't rely on memory!) I spotted these beginner’s videos,


OK they are in Russian BUT a picture beats a thousand words :-)

How to wind thread onto shuttle
Next two are used for making Josephine ring or chain
How to tie first half stitch
How to tie second half stitch
Clearest video I’ve seen, showing how I tat!
How to tie full ds (double stitch)
I know it as "Slip & slide" method

Enjoy and all be safe in the adverse weather we're getting both sides of the pond...
Posted by YorkieSue at 09:17 1 comment:

Got our web pages all downloaded in preparation for my new pattern site. :-) Except for the deleted links that Bo will have to use FTTwhatever software. Apparently we have to rename the old site to upgrade, which would wipe everything...  Still got brain frazzle from yesterdays delve into techno-babble!!!

Didn't get time to improve the Blog. I need to fathom how to get comments section going and how to put links into a side column, might play later...

Getting better with the ANKARS technique. Lizbeth #20 wouldn't close easy on the larger rings of 10-10-10.  So I reduced the counts to 8-8-8 building up to 8-12-8 for the top ring and dug out my Olympus #40 and it works much better. I'd forgotten how nice it tats and some grand colour combos. Not sure if it's still available.  Hope so, I'd like to get some white for bridal tatting. "WHAT?" you say... I know I don't tat in white but for these one shuttle ANKARS - I could succumb. Going to put a rose in the centre from Jeanne Lugart. I've no idea how many I've made since she shared her design over a decade ago!  Where does time fly? 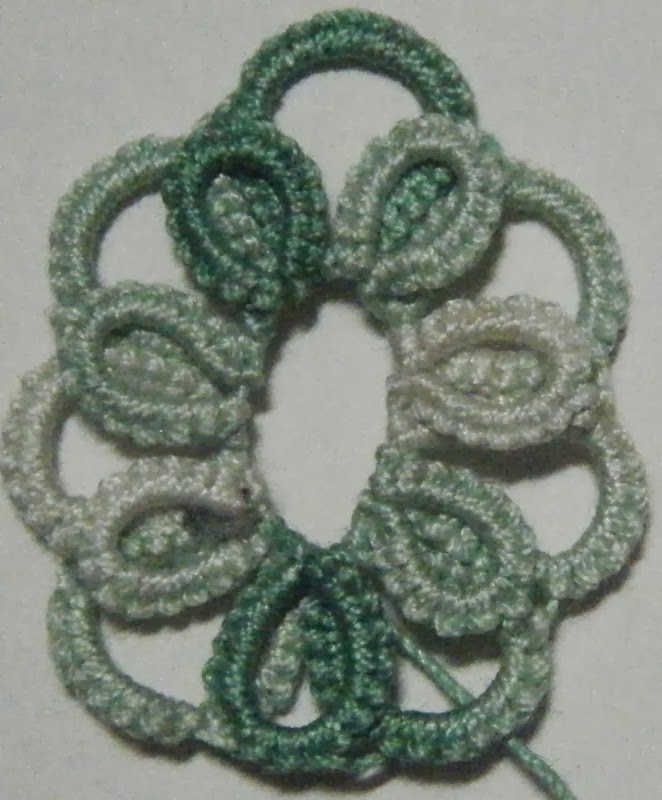 I also gold leafed a few shuttles in preparation for shuttle exchanges. They still need sealing and decorating with Bindi's and then more layers of sealant.  I will show the results after two of 'em reach their destinations... This is just "dangling a carrot" <giggling> Unfortunately the photo doesn't show the gilding too well. Top centre is a Joyti shuttle from India. Other three are Susan Bates - not sure if they still distribute the one's with picks? 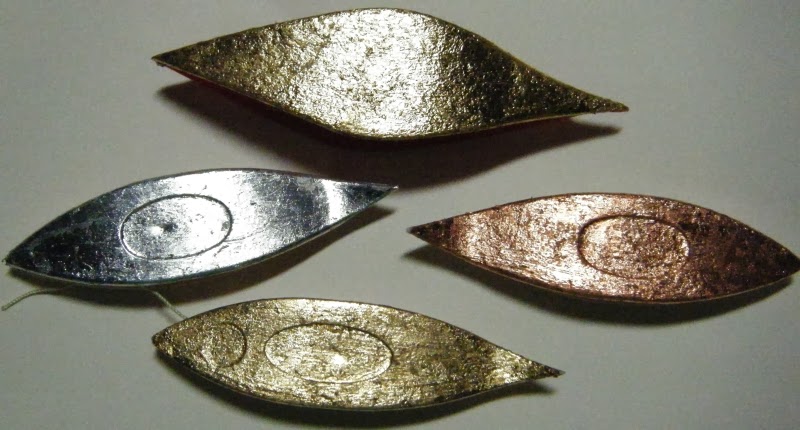 I've made two starts on the bookmark which is part of one exchange and I'm still not happy with the results... Time to rethink on that! Off to play catch up on Jane's latest TIAS

It' taken a while to get these off my camera.  I misplace the "stick thing" to transfer files... Well, I finally found it and like to share with you my "to meself", Christmas & Birthday present. I commissioned Jane to make me a "Special Order" from her shop Tatting and a little bit more. 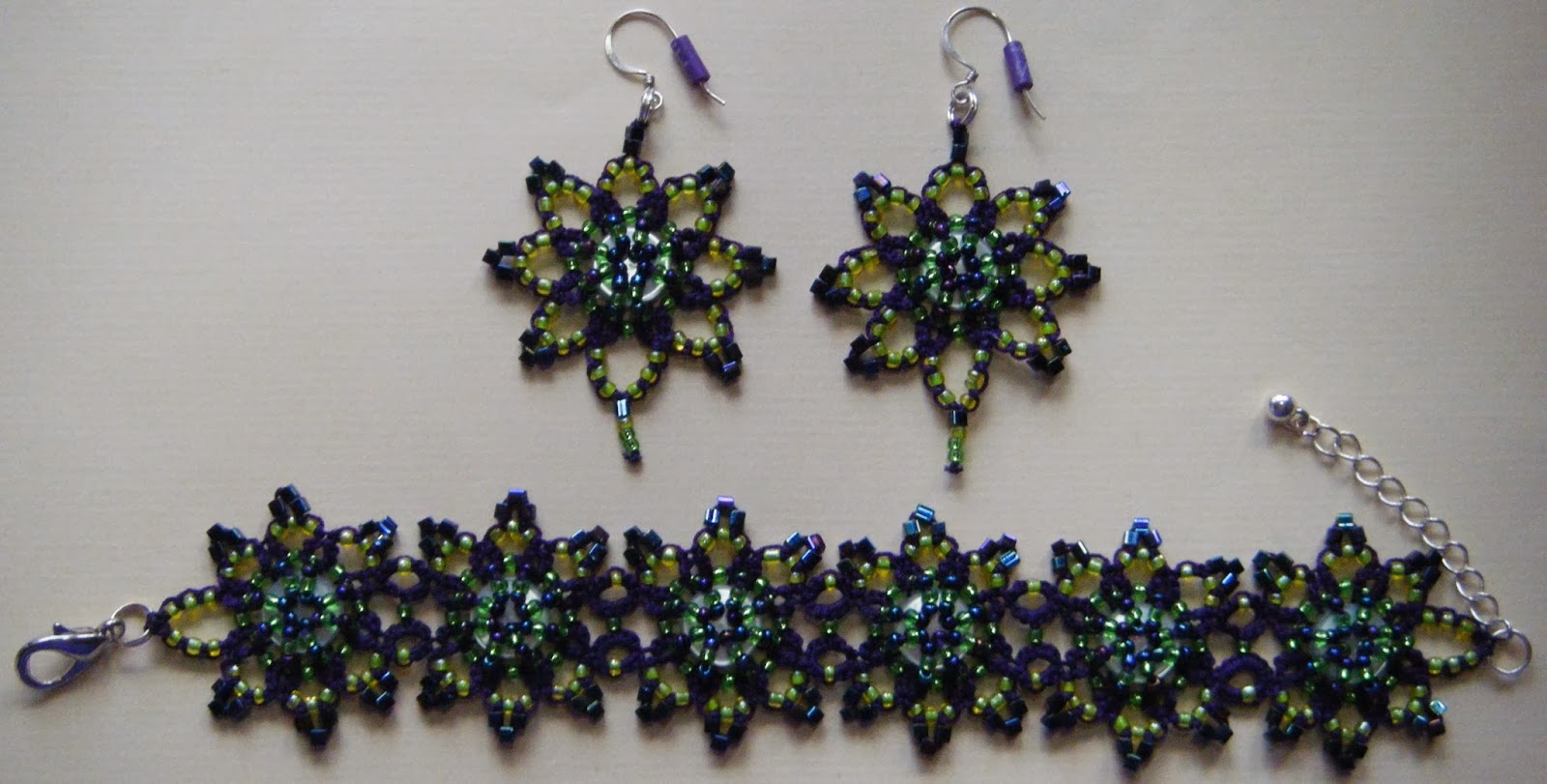 We corresponded till she knew just the right beads & threads in her stash. Then I left her too it, with no rush, knowing I would not be disappointed.. What a surprise when a package came through me letter box inside only 5 days!!! And they are gorgeous and soo very, very ME!!! 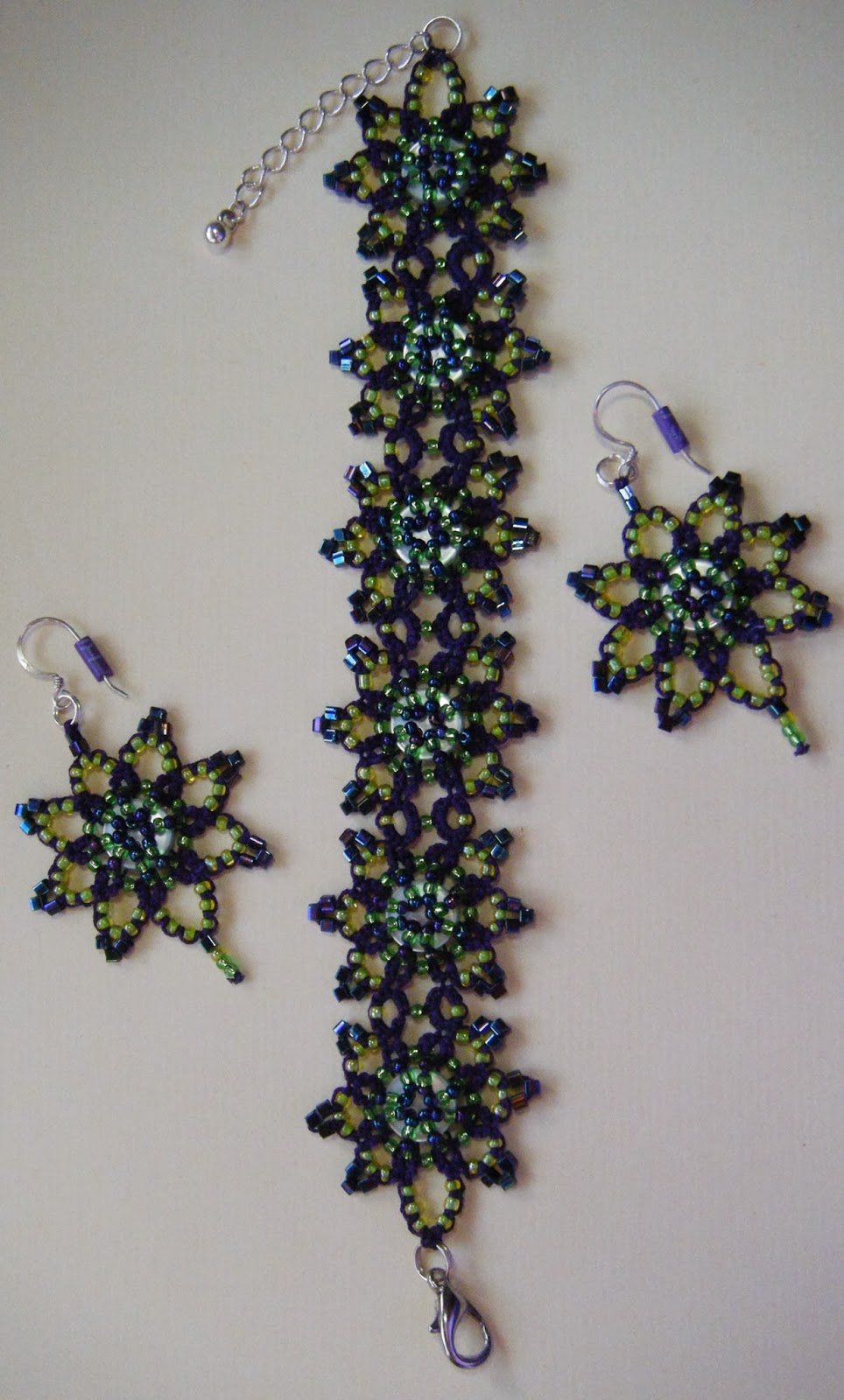 The photos don't do them justice, the Delica petrol beads twinkle :-) 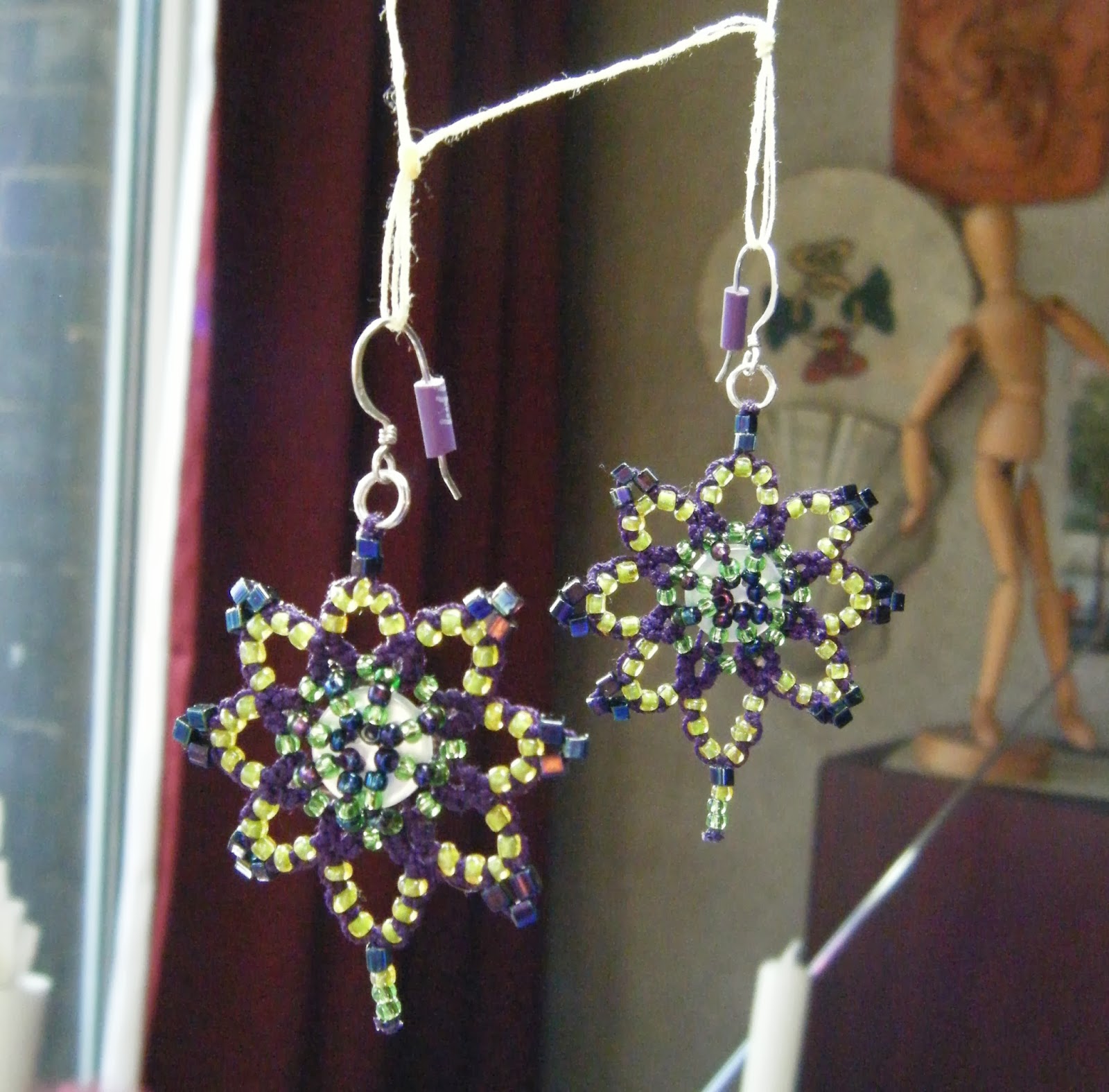 The balance is superb, they are light to wear but still have enough weight to 'em. 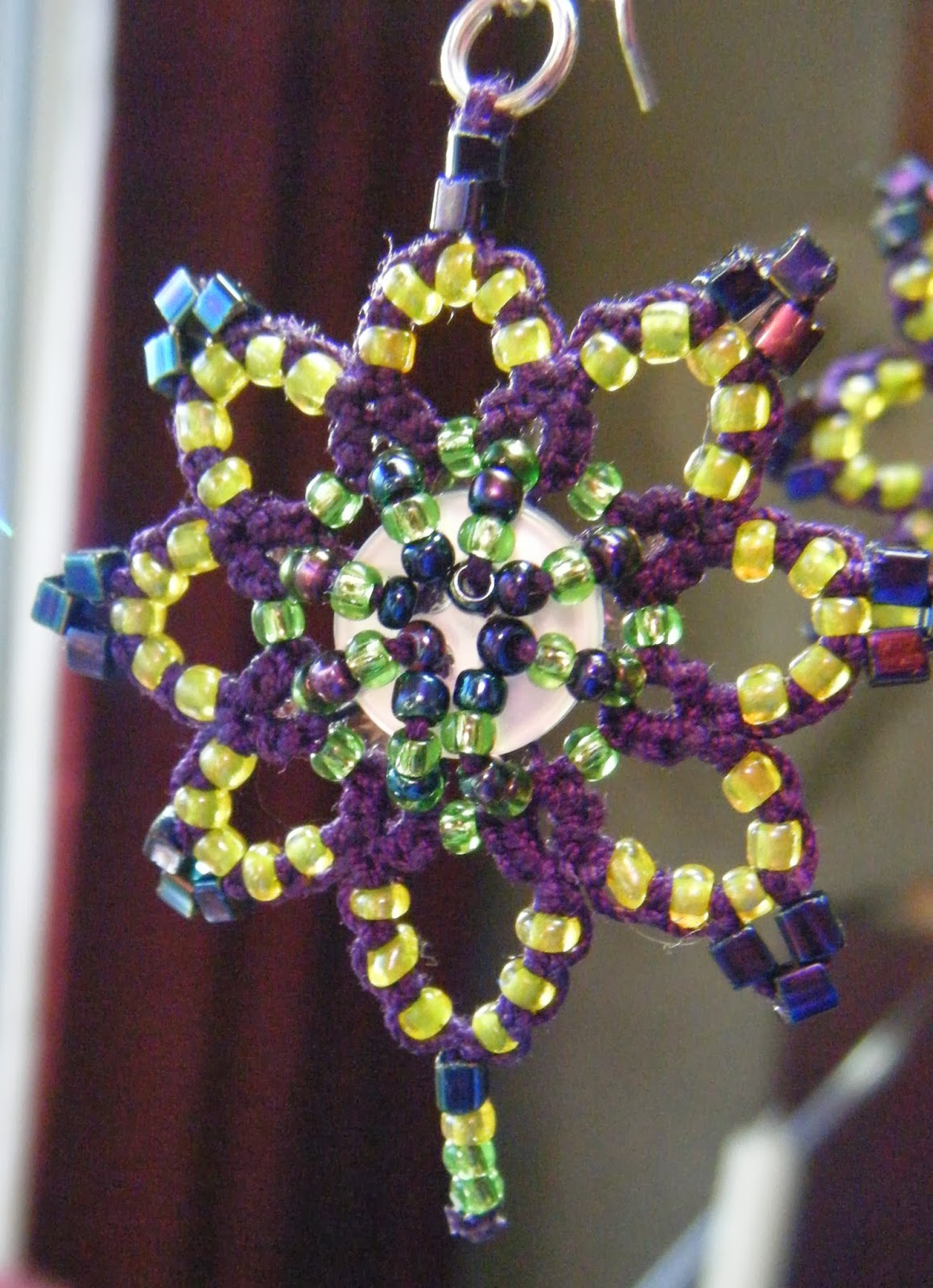 Email ThisBlogThis!Share to TwitterShare to FacebookShare to Pinterest
Sorry still trying to add link to a pdf... I'll come back & edit this post

After much debate on Facebook yesterday about the Russian pattern Free Pink earrings.  The notation wasn't clear & counts wrong.  Soo tried to master it - here is my conclusions & rework (pdf)... Here's my rework of the pattern... Need time to work a pair for myself - only got the one I played with:

OOOO wow - I got a new Blog... The old one has gone inactive
http://yorkiesuetatting.blogspot.co.uk/
Time's flown by since 2007! <yikes>

http://freespace.virgin.net/bo.hanson/Tatting/SuesPatternPage.html
but hopefully will master that soon.